Women Do Not Judge Attractiveness by a Man’s Resources

Attractiveness is a game of blind man’s poker.

Let’s put 50 men and 50 women in a sealed hotel conference room. What happens next?

Groups would began to form. 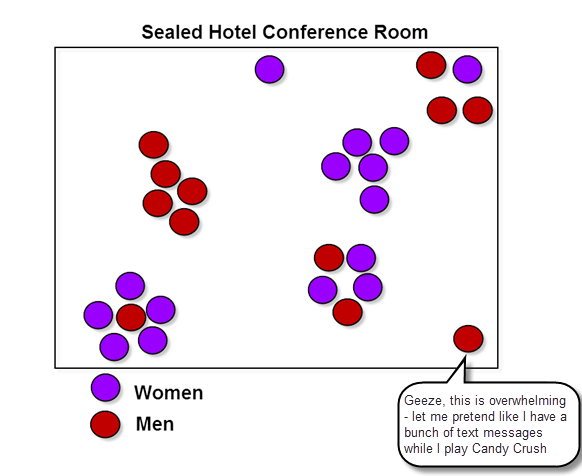 But how do these groups form? What is the basis for the group of men, the group of women, the mixed group and the loners in the room?

The group we form or join is based on our perceived social value by others. It’s like having a mystery number on your forehead. The goal is to pair up with the highest ranked (or most attractive) person that you can. 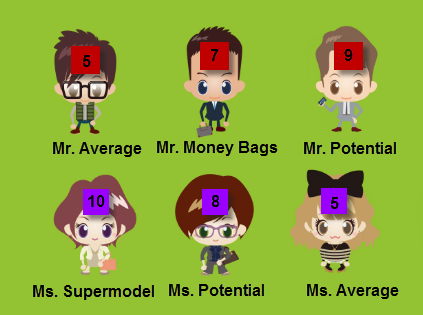 Immediately, any nines and tens are surrounded by huge crowds trying to talk to them. 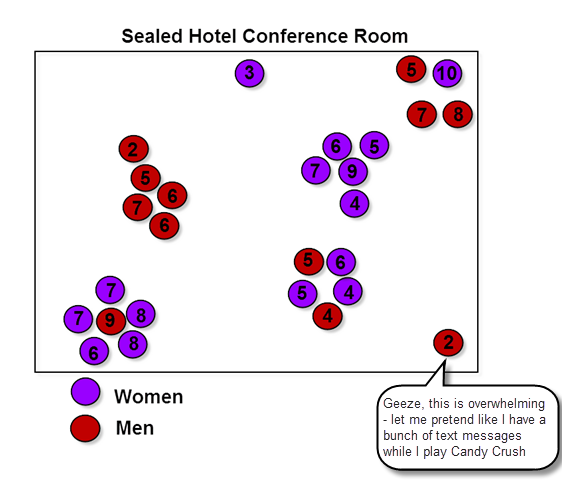 So how do you know your number?

If people flock towards you, you know your card number must be pretty high. If strangers flee as you approach them or divert their attention away from you – well, you’re on the low end of the social hierarchy.

Here’s how we learn about our value.

If we get rejected or ignored, we lower our beliefs about our self-value, and thus our expectations, of what we deserve friend-wise and love-wise.

The more rejection we experience, the more we lower expectations, and the less valuable people we seek.

If people accept us and are always asking for our opinions, then we raise our beliefs about our self-value, and thus our expectations.

If every single guy wants to be your friend and every girl wants to marry you, then you’d most likely never settle for a woman who is less than a ten.

Therefore the cue to your attractiveness is how needy other people act around you.

Real life is far more complex, but the point is, if someone is desperate to be with you, chances are they value you more than themselves. This is merely their perception and they may be completely wrong.

If someone avoids you, then they believe they think they can do better than you. Again, they may be wrong, but regardless, we interpret their behavior toward us as feedback on our own social status (value) and attractiveness.

The only way you can guess the number that is superglued to your forehead is by the feedback you receive.

Every single human being is influenced by others’ feedback, which is why everyone preaches about confidence and why being needy is bad. Being needy sends the following social pitch: “You’re so much better than me, so please, for the love of God, accept me.”

This is why celebrities receive nude pictures and stalkers. Because the people who do such activities believe that a celebrity, a normal human being with social status, is far more valuable than them, even if they don’t contribute anything to society.

We seek things that we perceive to be of higher value and we lose attraction for the things we consider lower value. This is why neediness is repulsive and why we are recognized to see it as a bad signal. It’s like a fear of snakes – a primal instinct for our social and mating benefit, even if we don’t completely understand why.

In surveys among tens of thousands of women, across all cultures, ethnicities, age groups and socio-economic standing, there is one universal quality in men that all women find desirable. 1

This is perceived social status.

The amount of social status or influence a woman desires varies from culture to culture, age group to age group and individual to individual. The bottom line is, women want men who are more successful, popular, and powerful than they are.

What most research point to, and what men believe social status is built on, is one’s wealth and resources. 2 From a tangible scientific aspect, this makes sense. It’s easy to measure and it validates the belief transmission game and stereotypes of what women are attracted to.

But if becoming desired by women was that simple, women would ask men for copies of their net worth statements, tax returns, and a list of all of their car payments. Yet, I’ve never had a conversation like that. Instead women ask me about my passions, my childhood fear of monsters under my bed, and what makes me tick.

Not to mention there are far too many wealthy men who can’t land a date to save their lives. Many of them are willing to pay a dating coach $30,000 dollars 3 to spend a weekend with them to help them learn the “skills” of attraction.

The psychology of status and wealth is a bit of a puzzle when it begins to be an indicator of attractiveness.

Whether you are a man, a woman, or a dog, your genetic code motivates you to solve two problems: survive long enough to reproduce, and throw your genes into the future by means of reproduction. This is why castrated dogs still try to mate.

Children of living parents tend to be survivors and procreators themselves. Anything our parents did, our grandparents did, or our ancient ancestors did that solved those two problems got passed down.  The genetic chain got passed down link-to-link even to the moment you showed up in the world.

Evolutionary science states that whenever something solves a creature’s survival and reproductive problems, that trait gets passed down to the next generation. It wasn’t a conscious decision where our forefathers sat down and made deliberate decisions. Hence why we have cancer and other terrible things.

For instance, let’s say you are a deer in the past. You’re a buck, and you are the first lucky one who grew antlers. Maybe some of your buck friends made fun of you for being different. But you and I both know that bucks have intense battles for females. Other bucks have weird mutations like two heads or one leg, but those don’t aid survival or reproduction, so they lose battles and slowly vanish from the gene pool. Being Mr. Buck Antlers is like showing up to a fist fight with a knife. You win! And your future sons will, too.

It may not have been your choice or your conscious decision to grow antlers, but since you had an advantage, you cast more of your genes forward than the other bucks. Your sons do the same. Millions of years later, you are the daddy buck to all the modern-day bucks in the world.

This basic example is fairly easy to understand. What’s mind-blowing is the fact that part of our very thoughts, desires, emotions, and behaviors also got passed down the genetic line to us.

Our modern-day mating psychology is not that different from a cave-dweller’s. This is why wealth and status from an evolutionary perspective is a conundrum. Men in their cave-man days didn’t have gold watches, Porsches, or swimming pools to demonstrate their reproductive fitness. In their prime, all they had was a little more meat or food than the next guy. That’s not much for women to go off of.

Not to mention anthropological studies show men and women were relatively equal in wealth and social status for the majority of human history. Material wealth is a rather modern intervention. Therefore, we must assume that women judged status and reproductive fitness of men in a different way.

If material wealth made men more attractive, then any guy flashing his James Bond Rolex at a bar would be getting laid – but trust me, he isn’t. Rather, women judge social status and attractiveness by our behavior, because behavior is all that our cave-man ancestors had to go on. It is the basis by which we judge social status today.

Research backs this up. 4 Studies show that women are equally attracted to young men that they believe have the potential to be extremely successful as they to are men who are already successful. This explains why the starving artist has no trouble finding girlfriends to support him, or why the Superbowl athlete can date supermodels even though he has gone bankrupt four times.

But social status isn’t some consistent number. It’s always changing with two things – the environment and the people in that environment.

For example, wearing a custom tailored suit and flashing your Rolex watch will receive many eye-rolls in high-end lounges in New York City, but in a small, poor village in Brazil, it will be all you need. Flaunting wealth in a developing third world country sends a statement about your status, while in the US it comes off to most women as insecurity.

The other issue with the classical view of status and resources is the perception that social status is not dependent on a woman’s value and belief system. Each woman has her own independent value and belief system that filters her view of attractiveness. The point is that social status is not fixed. It’s contextually relative.

Yes, genetics and resources do matter, but what matters more than anything else in attractiveness is our behavior. Therefore, to understand what makes each of us attractive, we must dive into what drives our behavior – our beliefs about ourselves (read: our identity).

Women Do Not Judge Attractiveness by a Man’s Resources