When two people commit to a relationship with one another, we tend to view it as so: 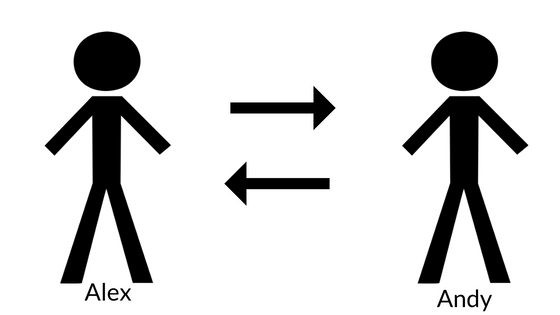 But the way they interact with each other is a result of who they’ve become because of their family, previous close relationships, and life experiences. So in reality, every relationship actually looks like this: 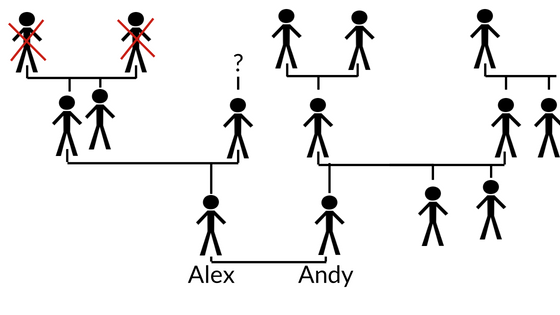 Both Alex and Andy’s expectations about how they should behave or feel about themselves or their significant other were born out of their family experiences.

As the authors of A General Theory of Love state, “Who we are and who we become depends, in part, on whom we love.”

Alex and Andy’s relationship is more than just two people committing to each other; it’s two family systems and life experiences colliding.

Alex and Andy’s attitudes and beliefs about how to save or spend money; how much time they should spend together or apart; or how tidy or chaotic their household should be is a byproduct of the way their family of origin operated and of the life experiences they went through.

The Roots of Your Family Tree 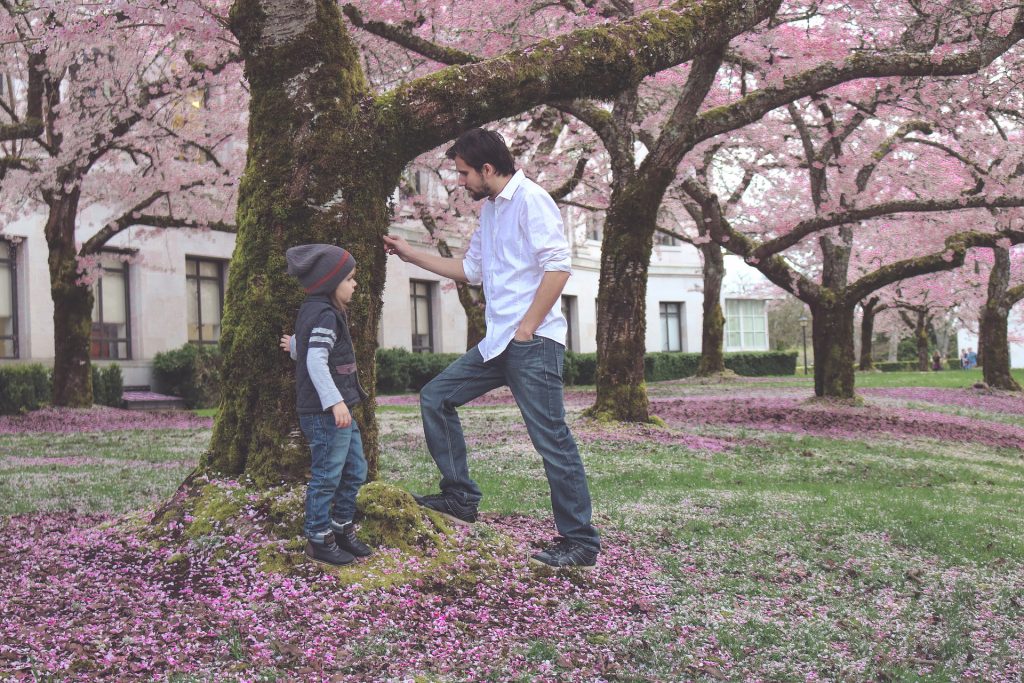 Ronald Richardson, a Bowen therapist, proposes that one’s “personality develop[s] in relation and response to other personalities in [one’s] family. And all of their personalities developed and changed in response…”

When looking at Alex’s side of the family tree, one of Alex’s parents (the one with the question mark) was adopted and never knew his parents. Alex’s other parent lost her parents at the age of 16 in a freak car accident. How do you think these events in Alex’s parents’ lives influenced how Alex behaved in future relationships?

In Alex’s family, the fear of loss led to Alex’s parents monitoring Alex’s every move and needing to know where he is at all time. Thus, even though Alex wasn’t responsible for the death of his mother’s parents or that his dad was adopted, his inherited family trauma impacted how he was treated growing up. This helicopter parenting often led to Alex sacrificing his individuality for the closeness his parents required. 2

When a difficult problem comes up in his relationship with Andy, it’s not unusual for Alex to agree with what Andy wants, and then later resent Andy because he doesn’t feel like his needs are met, even though he never spoke up about them.

The problem is that Alex is unaware of how his family history impacts his current relationship. Wolynn, the author of It Didn’t Start with you: How Inherited Family Trauma Shapes Who We Are and How to End the Cycle, states that “[w]hen entangled [in your family’s web], you unconsciously carry the feelings, symptoms, behaviors, or hardships of an earlier member of your family system as if these were your own.”

On Andy’s side of the family tree, he was the oldest brother of three with the middle brother being born five years after Andy. As a result, Andy got to be an only child for five years with his parents’ undivided attention and focus.

Being the oldest also meant he was the first one to blaze the trail of success and so he was often signed up for many different sports teams and pushed by his parents to excel.

Andy’s intensity can make him fairly rigid in how he engages Alex around household chores. A symbol of success in Andy’s family was how well the house looked, so Andy often demands Alex to pick things up rather than giving Alex the space to get things done when he has a little more time.

Despite asking for Andy to back off, Alex struggles to actually follow through on household chores since he never really had to do household chores as a child—his parents were fine living in a mess for a few days before cleaning up—further complicating the problem between Andy and Alex.

When it comes to discussing the conflict about household chores, both Alex and Andy have different expectations about how conflict should be addressed. In Alex’s family, conflict was discussed only for a minute or two and then everyone separated, only to return after a period with smiles on their faces, acting as if nothing had really happened. For Andy, conflict meant getting everything off your chest and verbally duking it out until things were resolved.

These unspoken rules around conflict clash and make both Alex and Andy feel unloved when an issue arises in their relationship. Alex thinks, “If he loved me, he wouldn’t get so heated and would be quieter. Love is not yelling at me.” Meanwhile, Andy thinks, “If he truly loved me, he’d face the problem head on with me instead of shutting down and avoiding me. He would actually show that what hurts me matters to him. Love is all about being open about how you feel, even if you have to scream about it.”

As you can see, what may appear like a problem between Alex and Andy has much deeper roots than just in their immediate relationship.

Exploring my emotional inheritance and understanding the spoken and unspoken rules of my family has been a laborious journey that has paid dividends in my own relationship.

For example, I grew up in a home where cleanliness was important and where dirtiness was expected to be noticed and taken care of without someone saying something. My mother took the role of the manager of the house and would lose her cool when things did not get done. As a result, the rest of the family often jumped to fix the problem in order to alleviate her anger.

Despite this way of handling the household chores, things never really changed. My mom would get angry, I would feel anxiety and do my part to fix things, and then we’d all go back to how we operated before. And like clockwork, this pattern continued throughout my childhood and into my current relationship.

When I first moved in with my partner, we put rules in place and assigned roles as to who would do what. I would do the cooking on certain days and my partner would do the dishes. As the weeks turned into months, guess who got super angry and passive aggressive with their partner around not doing the dishes?

I became critical and even contemptuous at times. After about the seventh time, I had an ah-ha moment and realized that I was doing the very thing my mother did to me. And what didn’t work for her also was not working for me.

This realization freed me from this inherited habit and enabled me to think of new ways I could work with my partner to solve this problem. While the dishes still don’t get done on the timeline I would prefer, my partner does eventually do the things she says she will without me nagging her. While our differences in cleanliness were legitimately birthed from our family of origin, the way we treated each other when we didn’t understand our family inheritance was not healthy.

Now we have a newfound respect for each other’s way of doing things and are working on developing our own family rules and habits that are direct and clear so both of us are on the same page going forward.

Growing Out of Your Family by Growing Up

One of the easiest things to do is to blame our partners for their character flaws. As Jenny Brown, the author of Growing Yourself Up: How to Bring Your Best to All of Life’s Relationships, states, “When we’re finding fault with others we stop working on ourselves. Our growing gets stuck in the blame rut.”

When you find yourself blaming your partner, you’ve just discovered an opportunity for personal growth. Reflect on the last problem you had with your partner in which you felt they wronged you.

Now reflect and think of ways this problem was handled in your family. If it was handled in the way you want it handled, and that happens to be a way that your partner is not following, then you are still stuck in your family’s web and haven’t grown up to become your own adult.

Use my popular Self-Exploration Guide to learn more about yourself and your own history so that you can work closely with your partner.

For those of us who grew up in insecure families, it’s important that we do the hard work of exploring the way our family of origin is present in our current relationship. You can do this by asking yourself and your partner questions related to the difficult problems in your relationship.

Difficulties in Togetherness Compared to Separateness:

Sometimes the intense difficulties we as a couple experience in our present relationship can help us to recognize clashes in the way our two separate families of origin operated. By learning about the roots of the problems, you and your partner can begin to create new family rules that work for both of you. This is not an easy task, but if approached thoughtfully is one that will create intimacy in your relationship.

A truly emotionally mature and intimate relationship occurs when both partners can wholeheartedly be themselves in an accepting and constantly adjusting relationship with someone who is different than them.

If you’re ready to start your personal journey into exploring the roots of who you are and how it impacts your current relationships, then start by reading “Family Ties That Bind: A Self-Help Guide to Change Through Family of Origin Therapy.” If you want to go even deeper, I’d recommend reading You Can Go Home Again. Finally, to truly grow up and become an adult who has intentionally defined their personal values and who can maturely love their partner, I’d recommend reading Growing Yourself Up: How to Bring Your Best to All of Life’s Relationships.

To the hard work,

P.S. A key way to being on the same page as your partner in all aspects of a relationship is to understand their inner world. To get to know their inner world, use my free workbook “Traveling Into Your Partner’s Inner World.”