The Conflict Escalator: The ABCs of Escalating Conflict

Have you ever taken an escalator? You start at the bottom and without paying attention to what’s actually going on, you move up and up.

It’s the same thing when it comes to escalating conflict.

Escalation within a couple’s conflict happens when each partner communicates in a way that leads to harsher comments, more intense emotions, and the volume going upwards, figuratively and literally.

The higher a couple rides the escalator, the more likely they are to say hurtful things they later regret.1 This can be seen in something like the jump from arguing about whose turn it was to take the trash out to verbally attacking each other’s character or even making threats about leaving the relationship. Threats tend to result from compounding unresolved issues, disconnection, and the longing to have some sense of control in the chaos of insecurity. Sadly, threats make things worse, not better.

Sometimes these hurtful conflicts can appear to be about nothing.

Steve: [Frustrated tone] Why is there a shovel left on the deck?

Janet: Knowing your ADD, you probably left it there like you always do. [Criticism]

Steve: I always pick up. You’re the one who leaves things around. Look at the three pairs of shoes scattered across the living room. You’re the lazy one. [Defensiveness]

Janet: Stop acting like a child and keeping score. Grow up. [Contempt]

Steve: Okay, Mom. I think I’ve outgrown being a child in this home. [Mocking tone]

Janet: Then move out.

Was this couple really ready to separate over a shovel?

When we look at the heart rates of couples who escalate conflict, we’ll see at least one partner’s heart rate, like an escalator, go higher and higher, to the point where they become emotionally flooded. Typically, the rate is over 100 beats per minute.

At this point, humor, the ability to hear each other’s perspective, and problem-solving were left on the ground level.

If you have had a relationship conflict in which you did say something hurtful and you want to repair the relationship, then follow the guide The Aftermath of a Regrettable Incident here. 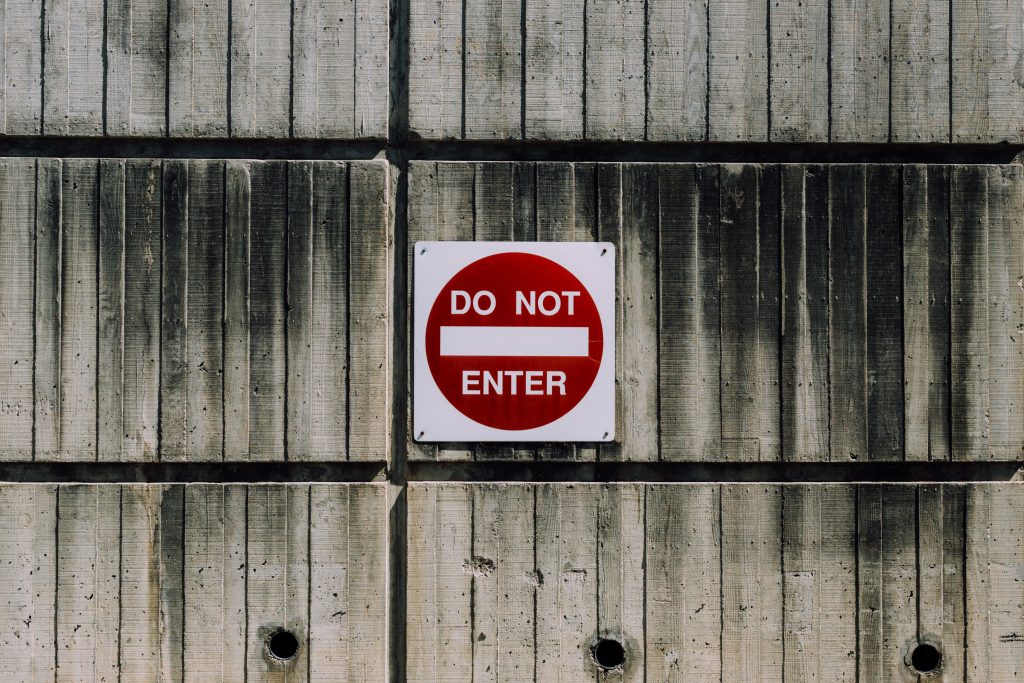 The Warning Signs: The ABCs and Ds of Escalating Conflict

Conflict escalates when partners attack each other using the ABCs – “accusation, blame, and coercion.”2

Accusation & Blame -> The act of putting 100% of the responsibility for a problem on our partner and/or attacking our partner’s character as the cause of the problem.

When we do this, we allow our brain to engage in fault-finding and come to the conclusion that because of our partner’s moral issues, stupidity, or personal flaws, we are in this mess. Essentially, we are saying, “It’s 100% your fault we are in this and I have no responsibility. I’m innocent.”

Instead of a constructive conversation and a healthy resolution, we accuse our partners of being emotionally volatile or incompetent and blame them for the problem.

Coercion -> a form of manipulation to force our partner to do something or change.

When accusations and blame don’t have the desired effect, partners often use coercion in an attempt to force their partner to change. Partners may nag consistently, make a demand, use threats, or drop guilt-tripping comments.

“When the other person hears a demand from us, they see two options: to submit or to rebel.” – Marshall Rosenberg, Nonviolent Communication: A Language of Life

A study on couples discovered that anxiously attached adults tend to use exaggerated expressions of hurt feelings and more guilt-inducing behaviors.3 When their partners experienced the guilt, the anxiously attached person viewed the relationship as more positive.

The problem is their partners reported the relationship as unsatisfactory.

The study concluded that while manipulation may foster a short-term boost in intimacy and commitment, it erodes the relationship in the long term.

Often with coercion, the partner who is at the receiving end of this behavior gives in to simply gain some peace of mind. As the pattern repeats, it becomes a toxic cycle that creates a lack of freedom to be open and honest with each other. The more manipulation is used, the less power it has unless the stakes are raised, which is what people do.

For example, Stacey used to express irritation with a slightly raised voice, as this often got her a response from David. But now she uses ultimatums and practically yells them to get a reaction from David. 4

Since David is conflict-avoidant, he complies but resents Stacey for it and emotionally distances himself from her. The farther he distances himself, the more she escalates. How they both approach conflict is destroying their relationship. 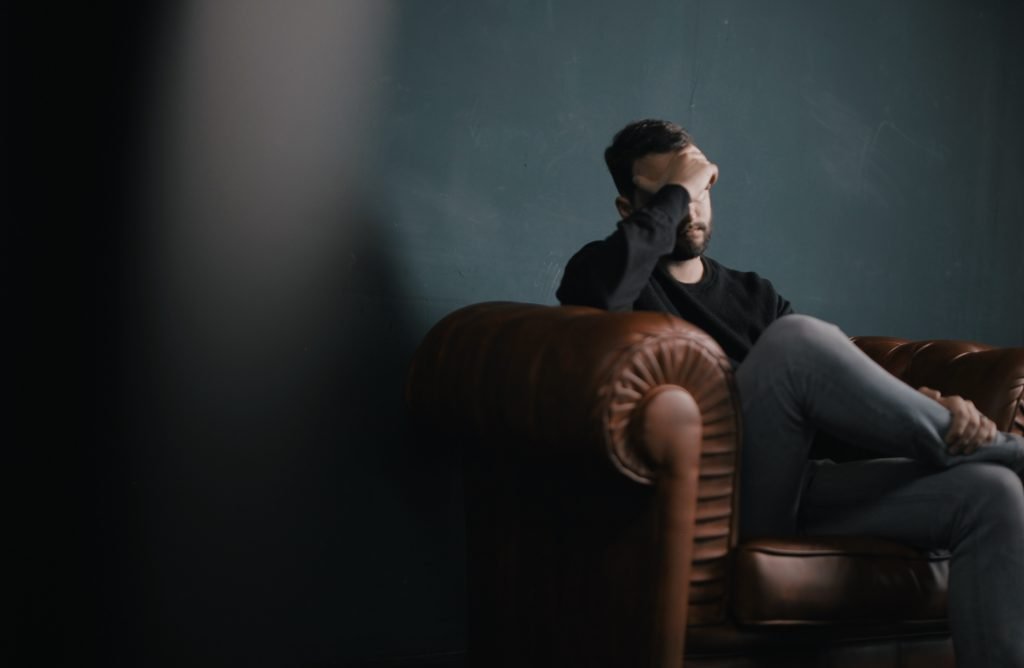 Coercive behavior reduces the safety of being emotionally open and connected, often leading to nasty conflicts about power and influence. It’s toxic to a romantic bond.

Defensiveness -> a counterattack to an accusation, blame, or coercion

When we are blamed or manipulated into doing something, it can lead us to feel defensive. We may have a desire to defend ourselves or point out faults in our partner. To learn about the nine types of defensiveness and the four remedies, go here.

The Two Cycles of Escalation Caused by ABCs & Ds

Often in relationships, accusations and blame are met with defensiveness. As partners argue over whose fault it is and who is to blame, the conflict escalates out of control. This is where partners say hurtful things to each other and damage the relationship.

The second cycle is coercion being met with resentment. The more partners feel coerced, the more resentment builds. Even if a partner complies on the surface, inside they bottle their emotions. Eventually, the bottle explodes and the conflict escalator rises instantly.

Experiencing the ABCs of conflict once or twice likely isn’t going to cause a divorce, but when the cycle becomes a habitual way of communicating with each other, escalation becomes inevitable because partners are primed to react to each other’s ABCs and Ds.

It’s practically impossible for a couple never to experience escalation during the conflict. The difference is that some couples are able to prevent escalation from causing damage to each other and the relationship, while other couples feel helpless and have not developed the necessary emotional regulation skills to self-sooth and step into their personal power during conversations.

Like a fork in the road, every choice of words, including the tone used, influences the type of conversation you’ll have. I call this Conflict Conversation Choice Points: 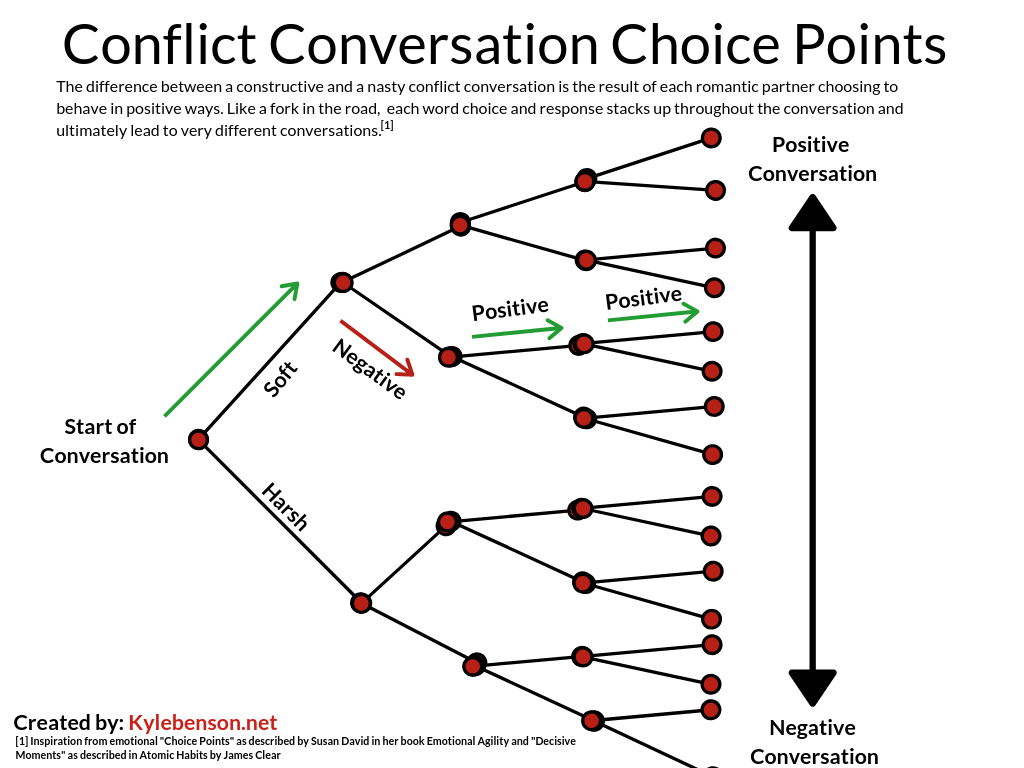 Below are seven steps you can take as a romantic partner to prevent escalation and take full responsibility for your actions in the relationship.

Don’t forget, a key way to maintain conflict and keep it from escalating is by taking a time-out. This allows partners to take some time apart and cool down to avoid escalation before returning to continue the conversation.

The Conflict Escalator: The ABCs of Escalating Conflict