Have You Conditioned Your Husband To Badger You for Sex?

It is quite the cultural norm for men to complain about the lack of sex in a monogamous relationship. Many men whine about always having to initiating first. Sometimes they send passive signals that they want sex, waiting for their partner to initiate. When they do this they’re hoping to manipulate their partner to join the most pathetic pity party in town.

Meet John and Brittany. They have been married for 7 years and have one adorable son named Brycen. From the outside, their relationship looks like the perfect American dream. But in the bedroom, it feels like they both sleep under the bed, where the monsters of their insecurities and vulnerabilities hide.

While I sit and listen to John describe their sex life, this is what I hear:

“We have sex maybe once a month… she never initiates….she has no sex drive.” I can see him expose the subcontext of his beliefs; that sex with Brittany validates his masculinity.  John makes tremendous efforts to increase Brittany’s sexual desire. He purchases sex toys, plans weekend romance trips, and tries to do everything he can to make Brittany want more sex.

Unfortunately, his efforts to increase her desire leaves him powerless. His frequent, almost daily, invitations allow her to remain passive. She can have all the sex she wants, whenever she wants, without ever initiating it. John is entirely dependent on what Brittany wants.

But this is not just a John problem. The tango of love always requires two. The sad truth is that Brittany has conditioned John to badger her for sex. Besides rewarding John’s whining for sex, she is teaching him that his whining motivates her sexually.

Brittany doesn’t have sex with John out of her natural desire. She does it when he makes her feel sufficiently guilty, or frustrated. Sometime she does it if she fears he might cheat on her if she hasn’t “given it up” lately.

Conditioning can take many forms, but this particular instance reminds me of the Chicken Pellet Model. 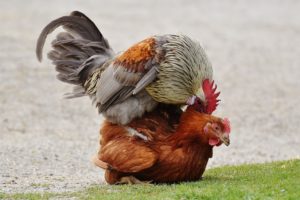 When the chicken pecks a lever in its cage, the chicken gets a pellet of food. This doesn’t happen every time. It’s only after a large number of pecks.

Here is what is so profound about this conditioning: Brittany has trained John to 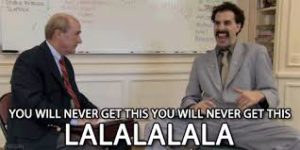 initiate more frequently than he actually wants to. Whether we’d like to admit it or not, the partner with the least desire for sex will control sexual contact and frequency.  Even in an amazing relationship.

This is one of the many conundrums of sex in monogamous relationships.

The solution to remove badgering from a relationship requires hard work for both partners. Each person and each relationship has unique factors that contribute to the Badgered Sex Problem.

In the case of Brittany and John, they had two major issues holding them back. Brittany had self-worth barriers to her sexuality. One traumatizing experience in her youth with a schoolteacher made her feel helpless to other’s desires. She felt others could take what they wanted and she had to give in. She didn’t feel worthy of her own desire because she feared giving herself up.

Her private sessions asked her, “what do you think you’re worth?”

Was she good enough to not cut her time short? Was she deserving enough to touch herself in any way that she desired? Or was she a slave to the perceptions of other people’s standards? Was she just rubbing her crotch to measure up?

Brittany began to have more orgasms over time. She started feeling better about herself. Her conception that she was sexually defective faded. It took her taking on her self-worth issues before she could have orgasms with John. Over time she started to initiate more. She started to push the upper boundaries of her sexual relationship with John as her newfound growth encouraged her to dive deeper and deeper into the newfound cave of her sexual desires.

And then John stopped wanting sex.

The Barrier of Borrowed Validation

Any emotional change in a partner causes a shift in the relationship. Brittany’s sexual progress didn’t validate John’s belief that she was sexually inept. It proved quite the opposite.

Brittany wanted and initiated sex not because of her partner, but because she like herself more. Her sense of self improved, which in turn challenged John’s sense of self. John’s self-worth before Brittany’s personal growth was influenced by her “sexual defectiveness.” John could artificially inflate himself because his partner’s performance was lackluster.

Her self-improvement caused John a great deal of anxiety. So much that he tried to put her back in the box of sexual inadequacy. When she stood her ground, John was left with a two-choice dilemma: to stop valuing himself by his sexual performance or to leave the relationship. Luckily for Brittany, John stepped up to the challenge and began evaluating the stories he had about his own value.

His dependence on validation from others caused problems for the both of them. He, like so many of us, believed that indifference was the driver of the no-sex bus. But as John began to learn how to hold onto himself in times of sexual uncertainty in the relationship, the relationship grew.

He no longer used Brittany’s sexual responses as a validation of his self-worth. Rather, he let her experience her sexual self in tandem with his own exploration. He initiated without trying to make Brittany want sex.

Have You Conditioned Your Husband To Badger You for Sex?