Throughout the 1950’s and 1960’s, Harlow unethically experimented with monkeys in order to understand the effects of deprivation on human infants.

He raised infant monkeys in isolation.

Despite being fed, some died. Others were frightened and behaved in an abnormal manner.  When he placed these isolated monkeys in a social environment, the monkeys were socially inept.

This makes sense. If you’re 25 and have never interacted with a single human being, then you have no basis of language or social norms, and you will fear others trying to interact with you.

So Harlow was like, well, what if they weren’t raised alone, but with a surrogate mother? So he bent some clothes hangers and stole infant monkeys from their mothers immediately after birth. He proceeded to placed them in a cage with access to two surrogate mothers made of wire. One wired mother was covered in soft terry toweling cloth. Luckily, he only did this to 8 infant monkeys. 4 monkeys could get milk from the wire mother, and 4 from the cloth mother for 165 days.

Apparently cuddling with wire isn’t fun – both groups spent more time with the cloth mother, even if she didn’t have milk. The wire monkey was only used for feeding; because the infants went back to Ms. Cloth afterwards, which blows the behavioral theory of attachment (conditioning) out of the water.1

If a scary object was placed in the cage, the infant took refuge with the cloth mother. Despite torturing the animals, one could argue that the benefits of the research outweighed the cost of suffering because it influenced the theoretical work of one of the Attachment Theory Gods, John Bowlby.

As evolutionary attachment theory evolved, it became a psychological model that attempts to describe the dynamics of long-term interpersonal relationships between humans. Bowlby believed that attachment develops as a byproduct of evolutionary pressures, since attachment causes the mother/attached caretakers to protect their infants survival in the face of dangers. Lions, tigers and bears, oh my!

A lot of people talk about attachment theory as an explanation of good and bad relationships, but it really only addresses how human beings respond when we are emotionally hurt, separated from loved ones or perceiving a threat.2 Pretty much anytime someone loses their marbles (neediness, stalking, snooping) in a relational context, the theory of attachment can offer some insights into their crazy behavior.

But here is what is crazy about attachment theory: our bad attachment experiences influence our willingness to explore and become emotionally secure and successful adults. 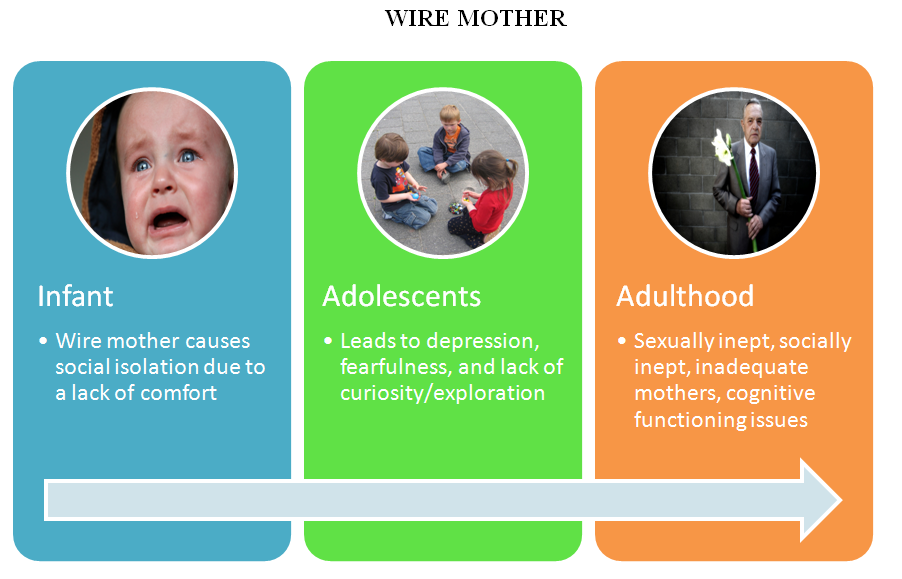 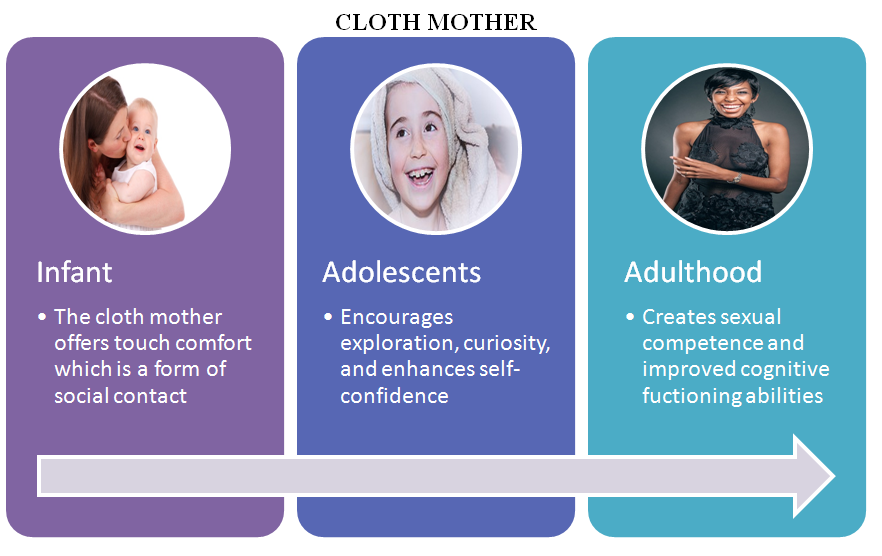 Harlow discovered that the infant monkeys explored the cage more when Ms. Cloth was watching, which supports John Bowlby’s evolutionary theory of attachment: the caretaker’s responsiveness and security is more important than food. That attachment as a motivational and behavioral system encourages the child to seek closeness to their familiar caregiver when they are alarmed, under the belief that their caregiver will offer protection and emotional support.

During this time, Harlow observed the differences between monkeys who had grown up with surrogate (read: uncomforting wired mothers) and those with normal living mothers. The surrogated babies:

Why were these monkeys so socially awkward, and how does this relate to social ineptness in humans?

When we are born, we have no words, and our bodies lack the muscle to even hold our squishy skull. We are useless and helpless.

During this time our brains have zillions of unconnected neurons waiting for pathways to be formed in our brain, so we can adapt to our surrounding environment to get our needs met and survive.

When we are born, we are surrounded by our parents. At times, we’re taken care of by our parent’s friends and other family members. 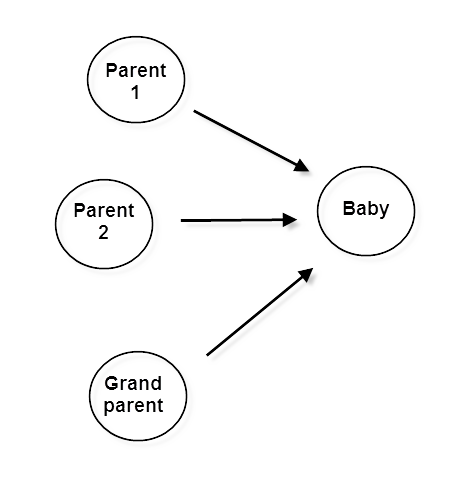 Through our interactions of pooping in our diapers and peeing on our caretaker’s faces, we begin to develop expectations about the availability and responsiveness of our caregivers to our needs. These expectations, like the monkeys, help us form beliefs about ourselves as children and our caregivers. 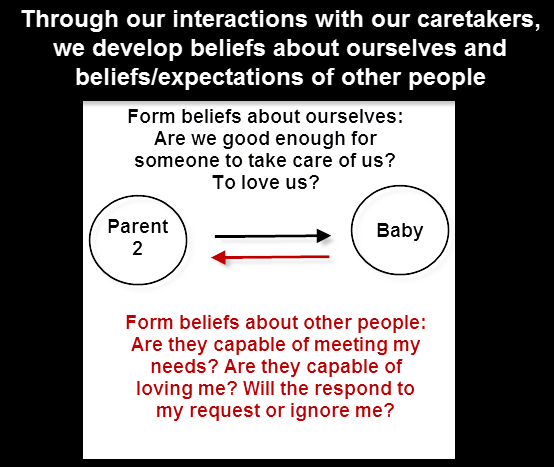 These beliefs about ourselves and expectations is why some people can be vulnerable and say, “I felt jealous when you were talking to Jake,” instead of “you were all over Jake. You disgust me, you filthy animal.” In one context, the person has the expectation that whoever they are with will be there for them even when they feel vulnerable. In the other, the man has the expectation that his lover will not be there for him.

Ironically, such beliefs influence our behavior, which in turn influence the behaviors of others.  Hence why I believe dating is one big self-fulfilling prophecy.

S = If our parents are responsive to our needs and our requests we believe we are a worthy individual and that others are equally valuable. In attachment theory, this is the secure attachment strategy, which is the best strategy for relationships, friendships and even coworkers.

A = If our parents are inconsistently available to meet our needs or fail to repair our bond after they fail to meet our needs, we start to form the belief that we are of lesser value than others. In attachment theory this is the anxious attachment. I used to have this attachment type, and would constantly change my identity with my girlfriends to make sure they loved me. This strategy values the opinions of others more so then the self. This results in becoming a relationship chameleon. It is also accompanied by the feeling of getting walked on. But the root of these problems is not other people; rather, it’s the belief that you are inferior to other people. This results in a plethora of problems.

D = Our parents met some of our needs, but ignored the rest. Maybe they fed you, but never held you. Such independence and self-parenting form the beliefs that others are not good enough to fulfill our needs. Therefore we must meet them ourselves. Such expectations lead to always chasing the next relationship in hopes you’ll find someone who “understands” you, only to find yourself getting bored or wanting to leave the Stage 5 Clinger within 6 months.

It leads to an incessant pursuit of avoiding intimacy, because the closeness of intimacy unconsciously pulls their early attachments into the future. This creates an expectation that they’ll be left to fend for themselves just like they were in their youth. To protect themselves, this type is ruthlessly independent and a harsh judge of others. In attachment theory this is known as the dismissive avoidant strategy.

F = Only a small percent of the population fits into this area of believing one is unworthy of love, while simultaneously believing that others will take advantage of them and treat them poorly. Such expectations about oneself and others leads to settling for abusive relationships or living in a constant state of lonely misery. This is the fearful-avoidant in attachment theory.

According to the research, 70% of the population keeps the same beliefs and expectations they formed in their childhood and carries them into their adulthood. Our early relationships with our parent shape – but do not solidify – our individual expectations of our later relationships.

Working Models of Love, Friends, the Self and the World

These expectations and beliefs, however odd they are, form as an adaptive strategy to our environment and mold our behaviors. As we grow older and are thrusted into the social arena, the complexity of our working models expand like the Big Bang.

Some of us enter into daycare battling over toys, while others were the peacemakers, comforting the toddler who lost the toy.

As we age, our peers become an important influence in our lives. We learn social norms among them. I learned that swearing was cool even though my mother would wash my mouth out with soap when she heard me. I learned that pretending to not care was important to be accepted.

As the days of our lives expand, we compounded our working models and fragmented them into relational schemas about the ways we should interact with our parents, our teachers, our peers, and the people we desire to love.

We connect these expectations by forming beliefs about the way in which our interactions should unfold. 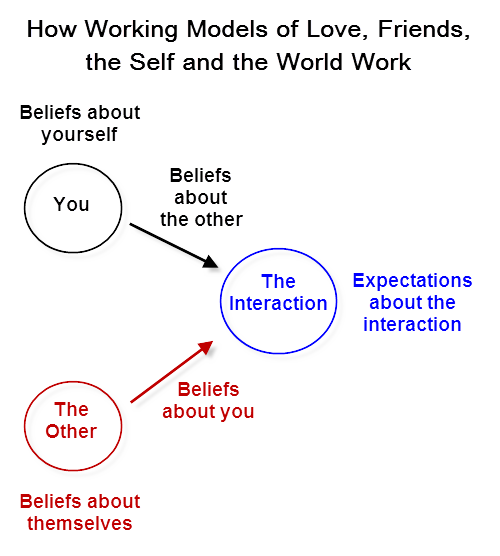 Through these interactions our brains form if-then statements in an effort to predict what may happen in the relationship if we do something.

For instance, if I ask my partner to cuddle and my partner snuggles up with me, I form a relational schema that helps me predict our future interactions when I want to cuddle. Within these expectations are the beliefs about what I deserve in the relationship and what the other is willing to offer. 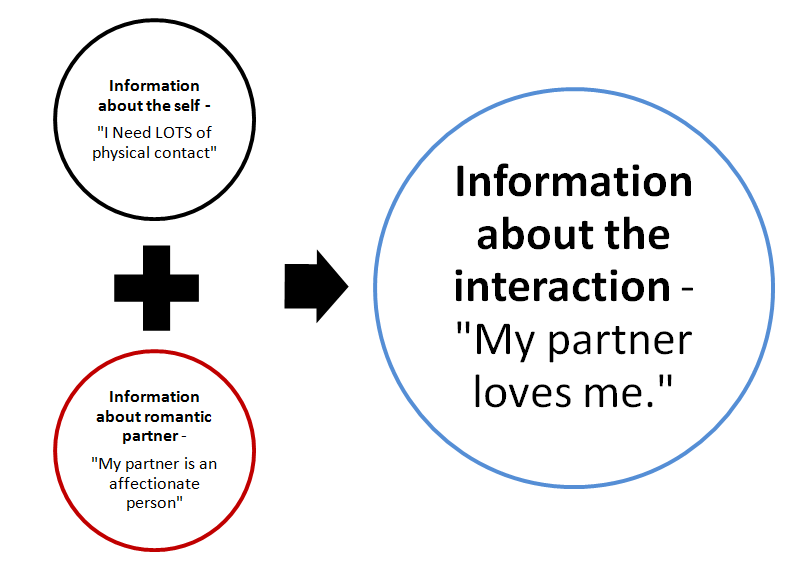 These beliefs guide our behavior in our relationships by allowing us to anticipate the responsiveness of our romantic partners.

But if we don’t assert our needs, we act under the belief that our partners are unable to meet our needs – even before they are aware of what they are. This is why vulnerability tends to remove and solve so much of the relationship’s problems, because rather than letting our theories of how we expect our partners to behave, we actually let them be a living human being. We allow them to choose how to respond, instead of assuming they will respond to how we feel.

We are always confronted with these expectations which vary across relationships, across time and across different situations.

The truth is, we do not hold one single working model for how the world operates and thus how we should operate in the world. We have adaptive models for our intimate relationships, our parents, friendships, coworkers, bosses and so on.

If you continue to run into problems after problems in any of these areas, the best place is to start with your beliefs. To evaluate how you see yourself in the world and how you choose to see others. Change the beliefs about yourself, your lovers, friends or the world and then, like alchemy, witness the quality of your relationships completely transform.