Rewrite Your Money Scripts in Marriage: 7 Steps to a Wealthy Relationship

Couples fight about money. All. The. Time.

In fact, money is one of the top five most common causes of conflict within relationships.1

But is the fight really about dollars and cents?

Like most conflicts in relationships, money has symbolic meaning to each partner. The fight really isn’t about dollars and cents, but rather how money is used in the relationship.

Teri Bach, creator of the Rewrite Your Money Story Series, and I sat down to discuss this exact question and what we could do to answer it best for couples.

Part of the problem is caused by the deeply personal and private feelings people have about their relationship with money and financial matters. People are uncomfortable talking about money, and, as Teri says during our interview, some couples would be more willing to discuss personal things like sex than they would money.

The other (and more prominent) cause is the fact that each individual is ingrained with their own money “scripts” that inform their approach to handling money. Like an actor reading a script, it informs you how to behave with money. Overtime this script develops into a map of how to make choices with money. One path on the map tells you to save money for that dream vacation in the distant future. The other path says to spend $7 dollars on a latte to enjoy life today. Which path you take is based on the money script you have developed from:

When it comes to romantic relationships, there will be parts of each partner’s money map that is the same as their partner’s, and other parts that will clash like tectonic plates, creating a volcanic eruption of conflict. When this occurs, the goal is to go beneath the dollar value and explore the signifiant meaning of money to each partner. I talk about this in the interview.

In the interview, you’ll also learn:

In our video interview, you’ll learn the seven steps that you can take with your partner to enrich your relationship, both emotionally and financially.


Download The Guide Below To Explore This In Your Marriage 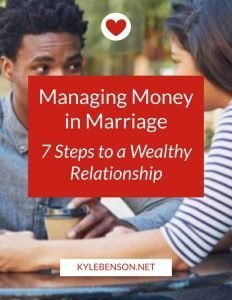 Other Managing Money in Marriage Articles:

Rewrite Your Money Scripts in Marriage: 7 Steps to a Wealthy Relationship